What was once a swamp at the mouth of the Utuhina stream, is now a maara kai in Ōhinemutu providing sustenance for the community and local wildlife.

She says when her grandmother Moana Kereopa was alive, she instructed the whānau that no one was ever to build on the land. Later, her Aunty Tuhipo Kereopa and comrade Bernie Hornfeck decided to grow kai at Maraeroa to help restore food security and sovereignty for the whānau and wider Ngāti Whakaue ki Ōhinemutu villagers.

“In 2010, Aunty Tuhipo and Koro Bernie started with six planter boxes on top of the land because the ground is too hot and the in-fill was no good for planting,” says Lani.

A partnership with Kai Rotorua to grow kumara tipu in the maara for planting throughout Rotorua has seen the number of planter boxes grow to 24 in recent years.

Lani says Ngāti Whakaue ki Ōhinemutu have also been restoring the village water-boundary made up of their tupuna awa – Te Utuhina and Rotorua-nui-a-Kahumatamomoe.

“Our whānau has taken responsibility for the restoration and protection of the riverbanks and lakefront around Maraeroa. Adding to this, the whānau were keen to establish a food corridor for birds and bees.

“Cushla has expanded on our whakaaro and we are now working on a wild garden along the Rotorua lakefront with self-seeding edible plants for both humans and wildlife to enjoy,” says Lani.

Cushla says the plan is to grow a wide variety of edible plants that will look after themselves.

“You don’t have to plant perennials every year, as they just keep growing in the same place. We’re starting with asparagus, wild strawberries, wild onions, and berry shrub, which will stay in the same space forever.

“It can be a source of plants for other people because you can dig them up in autumn and divide them into a number of plants which people can take home. Some natives, like koromiko, have tiny white flowers which the bees love,” says Cushla.

The whānau is currently working on a boil-up patch, featuring plants such as pūhā and NZ spinach, and a Mediterranean patch with globe artichokes and rosemary, thyme, sage and other herbs.

“One day, this will be a wild garden you can wander through and have a seat on the big rocks we dig out from the ground, and pick herbs, strawberries, and rongoa,” says Cushla. 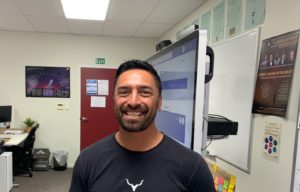 It’s been a few months, but Healthy Families Rotorua is now complete with a team of nine. New systems innovator, Teteira Ormsby, joined the ranks

Healthy Families Rotorua introduces its new project coordinator, Alexandria Knight. Alex previously worked as a kaiako at an early childhood centre, where she was responsible 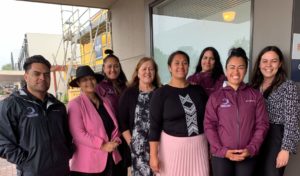 Recruitment and re-building the team have been the major focus for Healthy Families Rotorua this year. In 2021, we farewelled our leader, Mapihi Raharuhi, and